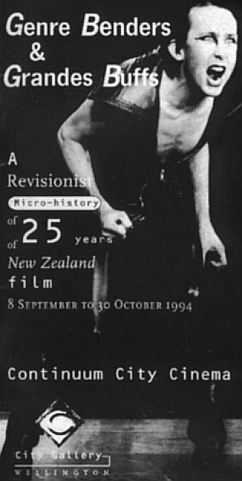 Aucklander David Blyth was cameraman on CANCELLED (1975) with Paul Oremland before making the short psycho-sexual film CIRCADIAN RHYTHMS (1976) followed by the so called punk feature ANGEL MINE (1978).

CIRCADIAN RHYTHMS is the New Zealand equivalent of Bunuel and Dali's landmark avant-garde film UN CHIEN ANDALOU (1928). Made up of a series of sequences scripted from dreams CIRCADIAN RHYTHMS attempts to bypass the conscious mind to explore the subconscious. 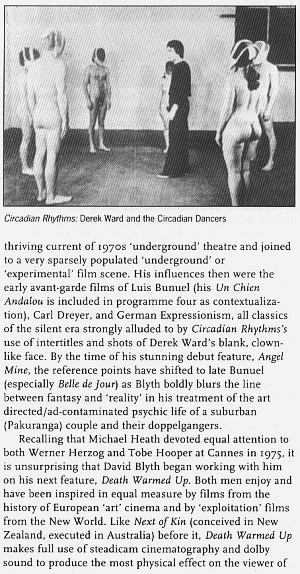 The film opens on shots of a man driving car along a multi-lane highway. Following a car crash the film goes into the man's mind as a flash of consciousness and emotions, complete with exclamatory intertitles such as, "Most mirrors are homosexual," dreamlike imagery and an electronic soundtrack by the New Zealand composer Ross Harris. Toward the end of the film we hear the sound of a woman panting in birth labour. As the images fade to white we hear the actual birth of a child and its bark like cry as it comes to consciousness of the world.

A fundraising event at the University of Auckland for Blyth's first feature film ANGEL MINE (1978) is credited as the first concert of punk rock music in New Zealand and the film was also the first to be funded by the then Interim New Zealand Film Commission.

A somewhat ragged and disjointed experimental drama ANGEL MINE brought a Do It Yourself, no budget, punk, or grunge, aesthetic from oppositional forms of popular music to film. It was, in a way, Blyth's manifesto for a low-budget, independent film scene for New Zealand. Looking at ANGEL MINE almost thirty years after it was made it is amazing to see how accurately it picked up on concerns (around Auckland) at that time about suburban domesticity, as expressed by consumerism and conformity, repressing powerful alter egos. That something dark and dangerous lurks, behind our social conditioning, at the core of all of us. Blyth has continued, in his subsequent filmmaking career, to probe and explore our private and repressed darknesses.

FEATURE : Martin Rumsby interviewed David Blyth in June, 2005. This will be presented in serialised format and is extraordinarily candid and revealing.

Lumiere Documentary at this year's Festival that includes clips from Angel Mine, the chap speaking at the front is a young Michael Heath. Read the article here.

A review of Angel Mine, which recently screened in Wroclaw Poland as part of the biggest New Zealand Cinema Retrospective ever..


"No locally made film has caused more hullabaloo since the advent of the State-sponsored NZ Film Commission than David Blyth's Angel Mine... It has been the cause of renewed urgings to the Minister of Internal Affairs Allan Highet to tighten censorship law, and to the Government in general to carefully watch how the taxpayers' money is being spent in the new surge towards a developed local film industry. Porn watchdog Patricia Bartlett, in particular, has been assiduous in penning letters to Government leaders and newspapers... Angel Mine, which has been made on a miniscule budget of about $30,000 and blown into 35mm from original 16mm footage, is much more than all the 'put down' ballyhoo suggests. Sensitively perceived and realized, if somewhat short in some areas on technical expertise, it is clearly a director's piece. What it does is make a particularly strong statement about urban materialism and the corrosive nature of visual advertising in the context of the relationship - sexual and otherwise - of a suburban couple. Highly amusing as well as thought provoking, Blyth has extracted good performances from his actors Despite the relative youth of 22-year-old Blyth, Angel Mine is as mature and entertaining an analysis on this there as has emerged in film here." - Mike Nicolaidi, Variety, 10 January 1979

"Angel Mine is an elusive and difficult film work to discuss. So far, after a brief major-cinema season, the critical response has been largely negative. One Auckland critic found the film 'about as erotic as a belch' and Stephen Ballantyne in the Listener shredded Angel Mine and referred to 'the banality of its assertions about suburban life'. But as a pointer to the critical contradictions Hamish Keith, writing one week later than Ballantyne and in the same journal rightly thought the film 'genuinely original'. I too found Angel Mine original and often arresting. There are few enough rewards for those of us who want to see the New Zealand film industry develop strongly and with imagination. We know, after Sleeping Dogs, that a professional and exciting thriller can be made here and Roger Donaldson must be given his due as a director of skill and energy. But Donaldson was working from a published novel, Smith's Dream His scope for originality was determined by the conventions he accepted. Since he directed from a given text and was intent on making a commercial success of Sleeping Dogs he had to produce a film with an accelerating forward drive, with a convincing climax. His problems therefore were problems of realism - the gun fights had to look authentic, the escape in the car thrilling. David Blyth on the other hand has set himself harder problems - he has to discover his form - and it is not surprising that he does not always succeed. On one viewing Angel Mine has the impromptu feel of a movie which evolved in the process of being made. Because there is no apparent story-line there is no necessary linear development in his film. Sleeping Dogs had a trajectory, a plot; Angel Mine has no plot - it circles around in search of itself and this can lead to the shallow critical response that it meanders, or that it is a mere series of vignettes. Blyth has the courage, the youth and energy, to make mistakes and any serious artist must be given the opportunity to make mistakes. In an important sense that is the fertile ground from which maturity springs. I'm glad the Interim Film Commission and the QEII Arts Council had the audacity to give Blyth financial aid on this project. The serious danger is that those organizations might take fright at the open and violent sexual encounters in the film. There is a graphic scene where the actors copulate. But within the context of Angel Mine this scene is more necessary than the commercially choreographed sequence in Sleeping Dogs. So too the final shots of lovemaking taken through an uncurtained landing window. Blyth here is supporting the thesis of Leslie Fiedler that in an emotionally and sexually immature society - our New Zealand - sexuality is inevitably linked with death fantasies. And the suburban couple only really make it in the form of their punk surrogates who have gunned the deep-frozen pair to death. Angel Mine is a worthwhile addition to our small score of local productions. ... So we have a new film which makes a serious though not totally successful attempt to break beyond the boundaries of our cinema-narrative conventions." - Russel Haley, Islands 7, April 1979

"Angel Mine (which came with the warning: 'This film contains punk cult material!') signalled in celluloid the arrival of punk and met with the kind of controversy you'd expect and more. 'Angel Mine came out of nowhere and caught a lot of people by surprise,' says Blyth. 'Twenty years down the track I don't know whether it's so controversial. I've gone on and become far more middle of the road in terms of my film-making. Blyth was coming to the end of his time at Auckland University where he had become influenced by European cinema rather than Hollywood as well as the values that went along with the music friends in a band were espousing. 'We all came from the garage band. I was a garage film-maker. I used an old red Bolex and like the musicians didn't have any formal education. They just got instruments and started making noises and I got a camera and started pointing it around the room. I thought 'why wait to get experience?' Everything was fermenting at the same time. The very first punk concert at Auckland University was raising money for Angel Mine. The thing about the film is that it was shot for $13,000 or $14,000, which meant I didn't have to go to any of the authorities and have my script fettered. It was an attack on the great suburban dream of New Zealand, the whole focus on 'get a job, get a house and a mortgage', a whole philosophy which I guess punk was about questioning. Despite the low budget and the controversy that followed the film's release, many critics today, as then, have hailed Angel Mine as a superb piece of film-making." - Mark Amery, Sunday Star-Times, 12 February 1995

"Angel Mine is a film about hanging in, in the city. Most feature NZ films have been about escaping the tangle of city life and its commitments! (eg Sleeping Dogs, Solo, Runaway, Landfall, Test Pictures). Angel Mine is based upon the principal that what enables us to stay alive in the city are our day dreams and fantasies, these function as our escape valve from the pressures of mass living etc. But what is going wrong is that our dreams and fantasies are being regulated and modified into mass-produced consumerable entities by the visual media, especially TV and films and TV commercials. They are giving us replacement dreams from our own escape routes which cater for our specific personal requirements NZ hasn't matured sexually yet! The country is still young and feeling its way tentatively - it hasn't got to the fast cars and slick confidence eg American show biz fantasy etc. It's still humping in the back of a Morris Minor, with one eye watching out for cops and the discomfort of grit off the shoes on the car floor grinding into the knees etc etc routines! There has been no erotic cinema in NZ because we haven't got past the mawkishness of an embarrassed thrash in the back of a car, before resuming our roles in a normal society where sex is for married adults in their own homes with the lights turned off of course! and the door locked! A rank generalisation - but you know what I'm getting at. Angel Mine therefore represents the coming of age, if you like, of the young couple but also of NZ cinema erotica next time!!" - David Blyth

David Blyth's first feature film Angel Mine is celebrating its 30 year Annivesary. This was the first film funded by the New Zealand Interim Film Commission. Angelmine along with the director is going to attend a large retrospective of New Zealand films in Wroclaw Poland in July of this year.

The festival has been curated by Dr Ian Conrich, Head of the New Zealand Media Studies Centre at London University.

David has also been invited to give a Master Class at the Media Studies Centre while in London.


NZ On Screen Top Ten Most Viewed titles of 2015

"I like to pull rabbits out of hats to surprise people". So said young director David Blyth, before unleashing Angel Mine. Inspired partly by the surrealism of Luis BuÃ±uel, Blyth's inventive debut is one of a handful of Kiwi experimental feature films to win mainstream release. Featuring a whitebread suburban couple and their liberated alter egos, the film explores ideas of consumerism, sexuality, the media, and taboo-breaking. The film excited criticism from Patricia Bartlett, and a notorious addition to its R18 certificate: "contains punk cult material."